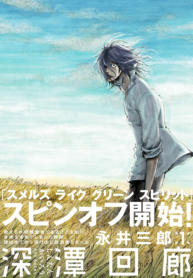 He was a teacher who knew his student was gay and still desired his body.
After running away from everything, he became a wanderer.

He wanted to get away from people, and took the name, Mos-san. Yanagida struggled with the pain of being in love with the same sex. He committed attempted rape on a student when he was a teacher, and ran away from there. Before he knew it, he had become Mos, a pitiful demon who had thrown his past away, but had no choice but to keep on living. He thought he’d lost everything, but a single boy reached out his hand to him.

Seven years have passed since the painful, but dear story of ‘Smells Like Green Spirit.

This Man is a Little Mischievous

Drops of Dreams, the Golden Birdcage