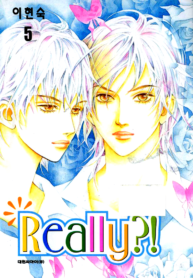 From Transcendence:
MiRyu has a gorgeous mother who’s quite childish for a woman. But asides from being just gorgeous, MiRyu’s mother is also getting remarried to a rich man. Worst case scenario for MiRyu herself is that this isn’t the first time that this has happened: her mother married multiple times in the past to pay off a debt. Now because of her mother’s new husband, not only is the debt that MiRyu’s mother had is paid off, but MiRyu also now gains a stepfather who has a daughter and a pair of extremely handsome twin sons. And MiRyu thinks that she just may be falling in love with either one or both of the twins. One just happens to be sweeter than the other, and the not-so-sweet one is always so stubborn. Her stepsister also happens to be her class’s Vice President. Just when MiRyu thinks that her life can’t get any worse, it always seems as though she’s proven wrong. Really?!

This Man is a Little Mischievous