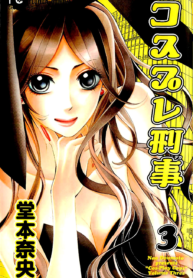 As a result of her “vigorous attitude”, Ritsuka is known as the tomboy of Sakuraya police station. While on duty, she was accused of a cosplay scandal. Later on that day, she discovers a girl who was raped by an unknown man in the men’s bathroom. With her fellow cops, she and two other policemen from the Criminal Investigation branch – Daisuke Takaya and Eiji Itsuki – attempt to find the suspect.