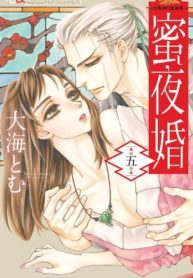 “You will be my wife.” At an early age, Midori was told this prophecy from a mysterious and beautiful young man. Even though Midori has an ability to see “unworldly things”, she initially believed that the prophecy was a dream. However, it is later revealed that the true form of the man from the prophecy was Shirogane, the spirit of archery! After some time, Shirogane, who appears before Midori again, requests Midori to become his wife. Gods, who carry the burden of impurities, are revived by the skin of maidens. Midori has an especially strong yet hidden “cleansing” power that could potentially aid the Gods. Although Midori has so far lived a solitary life and has difficulty associating with people directly because of her power, she decides to get married in order to help. However, “becoming the bride of a god” is something that’s beyond imagination and full of horrible chaos and dazzling pleasure.