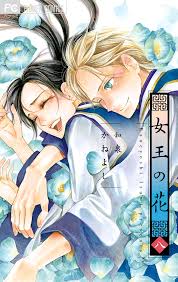 Long ago, there existed a land divided into four countries: Sou, Kou, Do, and Ah.
The King of Ah took on a wife from Kou and soon thereafter one from Do, creating a shaky alliance between the three nations. When the Second Queen gave birth to a son, the King cast aside the sickly First Queen and her daughter Aki into the depths of the Palace. But as Fate would have it, Princess Aki encounters a slave named Hakusei, who has peculiar golden hair and sky blue eyes. He promises his life to her and helps her train in the Six Arts under the guidance of the enigmatic merchant Seitetsu. However, when Aki outshines the Prince during a hunt in an attempt to gain her father’s acknowledgement, she sparks a war by besmirching Do’s honor and drives the Second Queen to poison her mother.
With nothing left but her faithful Hakusei, Aki is banished to the small country of Kou with a vow to return to Ah one day for revenge. But in the face of the mighty allied nations of Do and Ah, will the two survive long enough to carry out Aki´s vow?